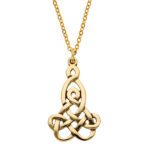 Cornish tin pixie pendant on a sterling silver belcher chain. Pixies were the underground spirits of the Cornish tin mines.

Cornish pixie pendant in shipwreck tin on a sterling silver belcher chain. Pixies were the underground spirits of the Cornish tin mines.

Also known as good luck knockers or spriggans, they were generally described as small, capricious little creatures that were often spiteful. Their presence was not considered altogether unlucky since they were scarcely ever heard, except in the neighbourhood of rich veins of tin, where they tapped away vigorously. It was common practice amongst miners to leave them a didjan (morsel) of their croust (lunch) in an effort to gain their goodwill. Failure to do this could entail dire retribution for the unfortunate but guilty miner.